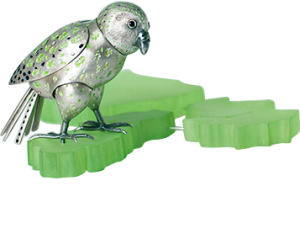 Kakapo is the rarest and heaviest, also only the flightless and nocturnal parrot. They are possibly the longest living bird at average life span of 95years, and have one of the loudest booming calls that can reach up to 5km.

Kakapo used to thrive all over New Zealand, until humans arrived along with cats, dogs, ferrets and rats. They became easy target for them because there are avian predators that hunt by sight but no ground predators in New Zealand, their defence was to freeze when in danger so that their plumage was camouflaged. Kakapo is extinct in main islands of New Zealand.

Conservation efforts began in the 1890s, but they were not very successful until the implementation of the Kakapo Recovery plan in the 1980s. Today, surviving kakapo are kept on three predator-free islands, Codfish (Whenua Hou), Anchor and Little Barrier islands, where they are closely monitored. Two large Fiordland islands, Resolution and Secretary, have been the subject of large-scale ecological restoration activities to prepare self-sustaining ecosystems with suitable habitat for the kakapo. The New Zealand government is willingly providing the use of these islands to kakapo conservation.

‘Kakapo Island’ represents a kakapo on these three islands, which are small dots on the map off New Zealand main islands.