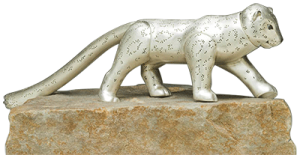 A moderately large cat native to alpine and subalpine areas generally 3,350 to 6,700 metres above sea level in the mountain ranges of Central Asia and is national symbol for Tatars and Kazakhs.

The global snow leopard effective population size (those likely to reproduce) is suspected to be fewer than 2,500 (50% of the total population, or 2,040–3,295). Poaching, habitat distraction, Afghan War all affected the species and it is classified endangered.

heir bodies are stocky, their fur is thick, and their ears are small and rounded, all of which help to minimize heat loss. Their paws are wide, which distributes their weight better for walking on snow, and have fur on their undersides to increase their grip on steep and unstable surfaces; it also helps to minimize heat loss. Snow leopards’ tails are long and flexible, helping them to maintain their balance, which is very important in the rocky terrain they inhabit. Their tails are also very thick due to storage of fat and are very thickly covered with fur which allows them to be used like a blanket to protect their faces when asleep. Unusually among cats, their eyes are pale green or grey in colour.

The snow leopard has a short muzzle and domed forehead, containing unusually large nasal cavities that help the animal breathe the thin, cold air of their mountainous environment.

The snow leopard cannot roar. They can kill animals more than three to four times their own weight, such as the bharal, Himalayan tahr, markhor and argai, but will readily take much smaller prey, such as hares and birds.

The snow leopard has not been reported to attack humans, and appears to be the least aggressive to humans of all big cats.